Rising Vineyard is nestled in a valley on the outskirts of the beautiful township of St Andrews - set among unspoilt bushland and rolling hills in the Nillumbik Shire. This subregion is like no other. Nillumbik is derived from the Wurundjeri term for the area nyilumbik, which literally translates to dumb or bad earth, and our terroir is unique to the rest of the Yarra Valley.

At 245m above sea level at its highest elevation, the vineyard gently rises and reaches out of the valley on its east, west, north and south-facing slopes. Here the region’s stars, Chardonnay and Pinot Noir, prevail. Small parcels of Shiraz, Semillon, Gewurztraminer, Riesling, Savagnin and Sauvignon Blanc persist from original plantings in 1984.

The Rising Vineyard’s soils are derived from ancient marine sediments deposited on the ocean floor between 440 and 385 million years ago (Silurian to Early Devonian). These alternating sand and mudstone beds (turbidites) were then compressed, gently folded and uplifted by the Tabberabberan Orogeny— a mountain-building episode about 380 million years ago. The resulting proto schists were eroded and dissected over time to produce the topography and low fertility soils at our site.

The weathering of this ancient basement has resulted in a thin veneer of skeletal duplex soils. A high proportion of bedrock fragments ensure excellent texture. A small proportion of clay provides just enough water holding capacity, and the sheer enormity of time has leached the soils of nutrients, so fertility is low, and vine vigour is constrained.

The variety of slopes and aspects on the Rising Vineyard give a natural distribution of lighter loamy soils on the crests, and slightly heavier, more clay-rich soils accumulate on the mid to lower slopes. Having planted our Pinot Noir and Chardonnay clones across these varying soil profiles, each vintage we are presented with distinct parcels with very different characters which, when blended, deliver an inherent complexity to all of our wines. So, as it turns out, this patch of bad earth is perfect for growing grapevines. 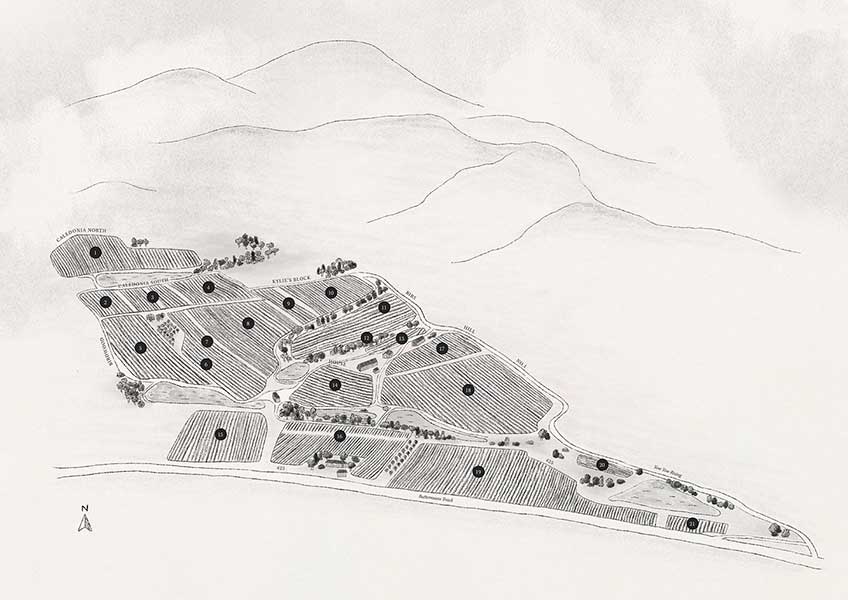